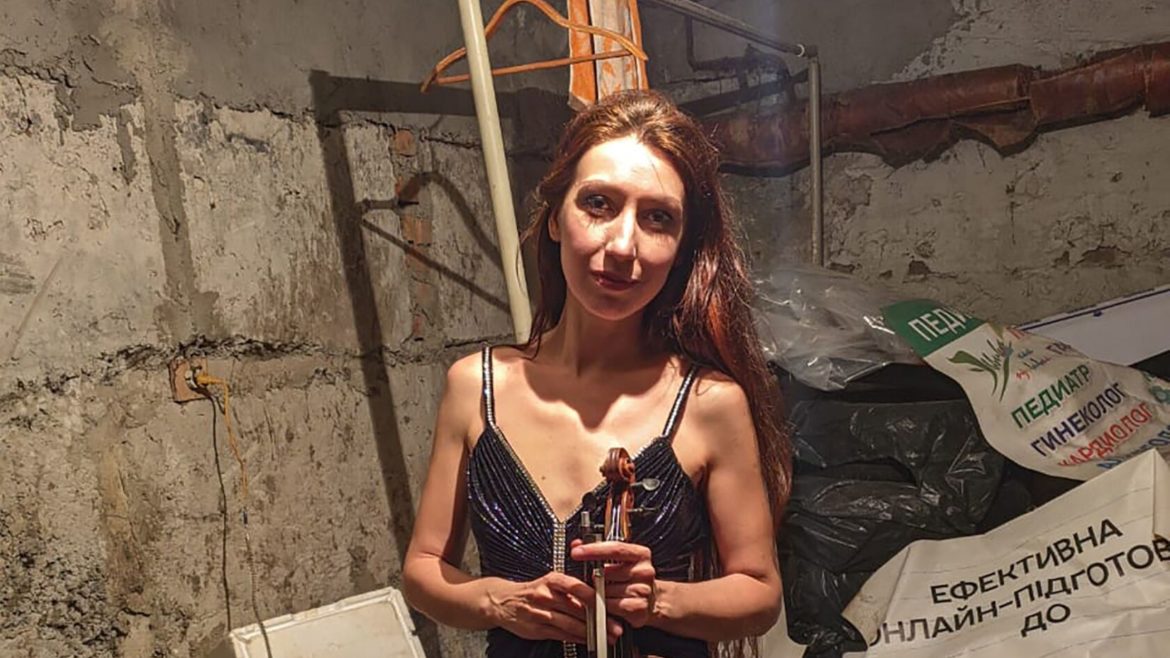 A gentle tune from a violin played by a musician who has been dubbed Ukraine’s “cellar violinist” is a lullaby for a child sheltered in the dark basement of an apartment building in the besieged Ukrainian city of Kharkiv.

Vera Lytovchenko has become an internet icon of resilience as images of the concert violinist playing in the basement bomb shelter have inspired an international audience via social media.

When the heavy Russian bombing of Ukraine’s northeastern city of Kharkiv started two weeks ago, Lytovchenko, her professor father and neighbours sought safety in their building’s basement.

“Bombs can fall everywhere in our city, so we decided to go down in the cellar,” the 39-year-old violinist told The Associated Press via Skype Wednesday during a brief respite from the bombing during a temporary cease-fire. “We’re about 12 people now. We have little boys. We have teenagers. We have old women.”

A week into their basement huddle, Lytovchenko decided to try to lift the spirits of her cellar mates by holding small concerts.

“All these people are my brothers and sisters now,” she said. “I was trying to make them think about something and not about the war for some minutes while I’m playing.”

Later she thought to post her recitals, featuring the calming strains of Vivaldi and even Lytovchenko singing a Russian folk song, on social media. The reaction surprised her: more than 40,000 views on Facebook and thousands more on YouTube.

“I didn’t expect that because I was posting just to reach my friends, my relatives. My aunt is near Kyiv and I’m afraid for her,” she said.

“My friends are in different cities all over Ukraine and I’m trying to keep a connection with them, I text them several times a day to know if they’re alive,” Lytovchenko said. “Many people text me now saying that my videos give them such support and hope. They can see that someone stays here” in Kharkiv.

“Someone is alive and someone keeps hope and is optimistic,” she said.

On Wednesday, during the temporary cease-fire in Kharkiv, Ukraine’s second-largest city, Lytovchenko was able to return to her apartment for a few hours. She told the AP she was happy to see sunlight after spending two weeks in the dark basement, adding that she and her neighbours are lucky because they have heating in the cellar and food.

Before the war, Lytovchenko played for the Kharkiv City Opera orchestra and taught music lessons.

“It was another life … a normal life,” she said of the time before the war. “I’m an orchestra player. I am a teacher in college. I have my students, I have friends, I play concerts, I play operas and ballets. I play Italian operas in the theatre.”

Describing Ukraine before the war, Lytovchenko said: “We had a cultural life in our country, our cities, in spite of the coronavirus. We were vaccinated. It was a normal life. … But now we can’t understand what is happening.”

Lytovchenko says she hopes that her posts can help raise funds for Kharkiv’s music community.

“I dream about my little financial fund, because I received messages from all over the world, from all countries. They texted me, they want to help,” she said.

She wants “to help musicians … and to rebuild our city, our conservatory, our music college, our music school,” she said. “To help our musicians who lost their houses and help musicians to return to their own cities and not to be refugees.”

Lytovchenko said as frightening as it is, playing in the cellar to lift the spirits of others has given her new encouragement.