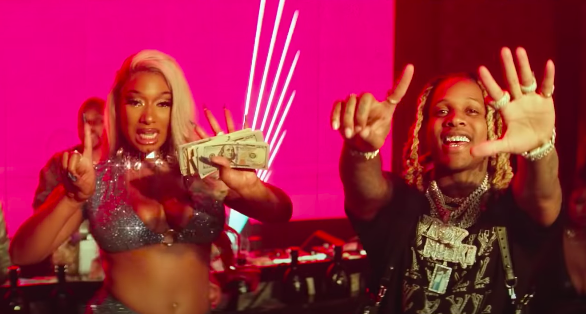 When Megan Thee Stallion and Lil Durk are in business together, they’re unstoppable. The duo released the music video for their fan-favorite collab track “Movie” on Thursday (April 15) and brought the lights, camera, and action with them.

Directed by Mike Ho, Megan and Lil Durk are the life of the party being held at the fictional club Stallions. As cash seems to rain endlessly from heaven above, multiple dancers perform jaw-dropping pole routines, pouring drinks into each other’s mouths, and dancing the night away to the sensual track’s snappy chorus. Intermixed between the festivities, Megan channels the early aughts as she raps with effortless cool and confidence in an orange bikini and sunglasses.

Originally released as part of her debut album Good News last year, the bombastic club anthem’s lyrics take place within a strip club and allow the two artists to take on very different perspectives of the same night: the happy-go-lucky VIP attendee at the club; the powerful, hard-working dancer on stage. They cross paths in the song’s chorus, where Lil Durk raps: “Tell her shake it / Drop her friends off / And take her pants off.” Megan easily counters his proposition with one of her own: “Tell him spend it / You ain’t got no money / Keep your hands off.”

The release of the visual follows the Houston rapper’s star-studded night at the 2021 Grammys last month, which saw her dominate the stage alongside Cardi B with a powerful performance of “WAP” and pick up three wins for Best New Artist, Best Rap Performance, and Best Rap Song. In response to the video’s release, Megan shared a simple message on Instagram: “Thank you my babies for coming to Stallions.” Come again soon.