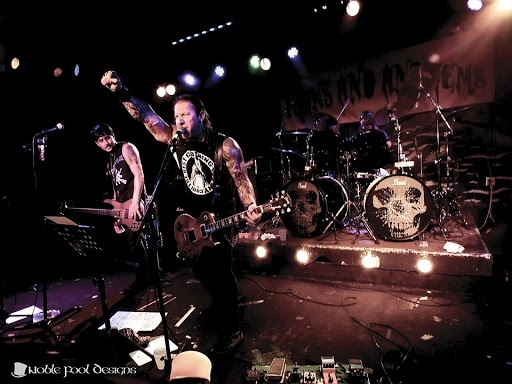 If you like your toe tap and foot stomp to your rock music, then you’ll love the the latest offering from Black Wolf Mountain. Their previous single Hangman was a symphony to the rock royalty that’s inspired their work. The video transforms you to a saloon bar in the old west while the drums make want to order whisky and slam your fist. You can check out Hangman here:

Formed over the Summer of 2017 by singer, songwriter and guitar player, John Adams (formerly of national/touring band Saints of Rebellion). John Adams, a Florida native and current Arizona resident, along with drummer Dylan Kidner (an AZ native) teamed up to form Black Wolf Mountain. BWM is rounded out by guitarist Jack DuChene (originally from Detroit and current AZ resident), and bass player Alex Cabaccang (an AZ resident, originally from California).

Black Wolf Mountain combine a wide variety of influences to make a completely fresh and unique sound. Their Influences include (but certainly not limited to), Black Sabbath, Black Label Society, Slash, Texas Hippie Coalition, Lynyrd Skynyrd, Hank Jr., Motley Crue, Shadows Fall, A Day To Remember, Slipknot, and Guns N Roses. Combined, the members of Black Wolf Mountain come up with a sound, completely unique and unto themselves.

Black Wolf Mountain released their First Full Length album in September of 2018, recorded by engineer Ty Simms at The Recovery Room in Conway, AR. Black Wolf Mountain’s First Music Video to be released from their debut album was ‘Drinking Gasoline’ and was released Thanksgiving Day of 2018. The band spent the next year opening for touring national acts and gaining fans around their local scene. Black Wolf Mountain has continued to make sure new music keeps coming out. On the 21st of March in 2020 the band released their newest Single and Music Video “Empty Frames”. With more on the way and a second album in the works, its best to keep an eye out to see what will happen next. Check out their single “Retribution” on YouTube.

Their latest single “Hangman” hit #36 on Billboard MRI and #28 on Foundations SMR Charts peaking in January 2021.

“Hangman” was also chosen by Sho-Bud Music for their music catalogue to shop for sync placements. Their new single “Dance” will be released online on March 5th for pre-order and March 12th on all streaming outlets!

We can’t wait for Dance to be released, and with a second album in the offering 2021 looks like being an exciting year for Black Wolf Mountain. So if you like your music rocky might be time to don your Stetson and Cowboy boots and come along for the ride.