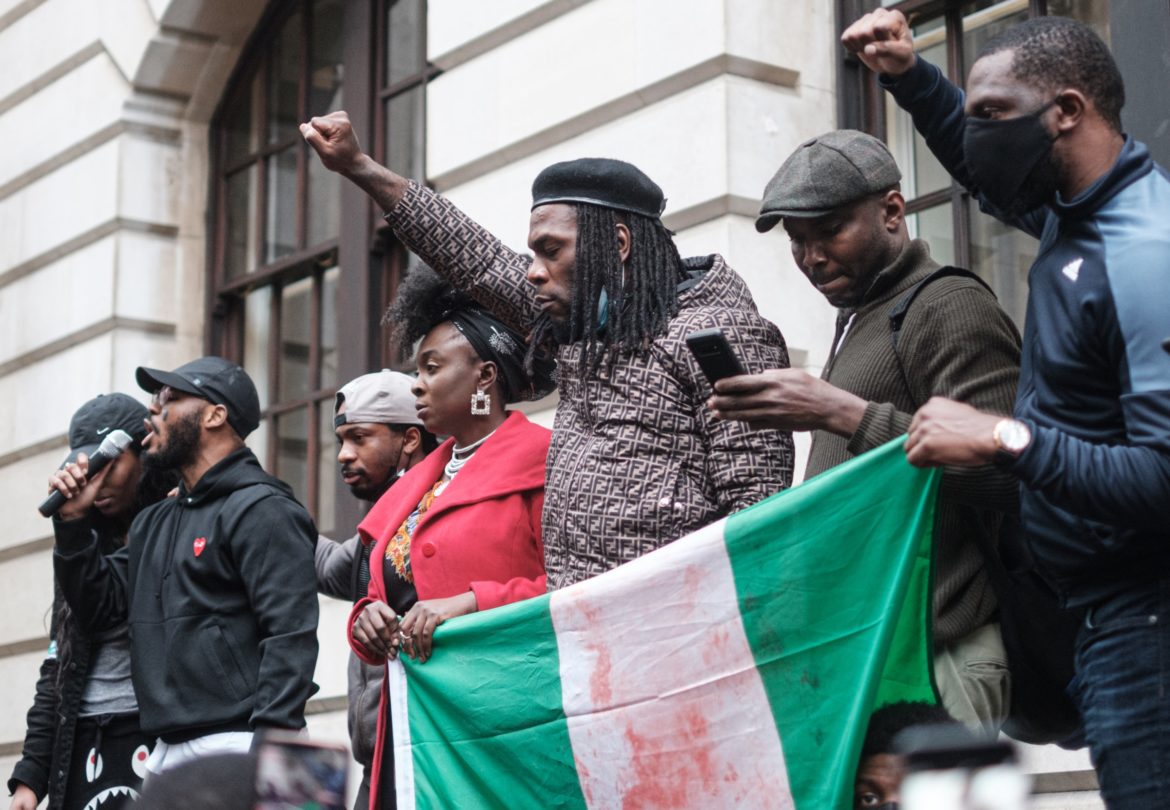 The hashtag EndSars first emerged in 2017 as Nigerian activists called for the dissolution of the Special Anti-Robbery Squad from the Nigerian federal police unit.

SARS has been working within Nigeria for almost three decades. But over time, it has been known to abuse its power when it comes to the handling of Nigerian citizens.

When did the #ENDSARS movement begin?

Protests against the unit began when a distressing video emerged on October 4th showing SARS officers using force whilst dragging two men from their hotel and as reported by the Guardian shooting one of them outside.

Consequently, there was a spew of protests all over West Africa’s oil capital. Protests erupted not only in major cities such as Lagos and Abuja but other cities too; Port Harcourt, Calabar, Asaba and Uyo. Demonstrators and activists took to Twitter and Instagram to post the unrest happening throughout the country. Before long Nigerians abroad joined them and posted their own experiences. Soon influencers with millions of followers came out in support, posting #EndSars and calling for an end to police brutality.

But, even when the Nigerian Police Force on the October 11th in “response to the yearnings of the Nigerian People” abolished SARS and at least two of the officers in the video. Protests continued asking for further reform in the country “A New Nigeria”.

“It’s not just about EndSars, at this point it’s become a revolution.”

“This is the most important moment in Nigeria’s history… that is what we are witnessing right now because if nothing changes after this, if this doesn’t work, then it is over.”

Burna Boy is not the only artist calling for a New Nigeria with Wizkid joining several protests, his most famous being on October 10th saying: “Nigerian youth don’t let anyone tell you, you don’t have a voice.” The musician has also joined the fight for a “new Nigeria” prolonging his new album’s release date to avert all his energy and attention on the momentum of the movement.

Kelly Rowland joined him on Wednesday using Twitter to show her support for the #EndSars movement: “Everyone has said it all! It’s ripping all of our hearts apart! It’s unnecessary! Especially when all a new generation wants, is CHANGE and to be a difference! They SHOULD NOT have to lose their lives for it! #ENDSARS Nigeria I stand with you always and forever!”

Tinie Tempah also on Wednesday posted to his Twitter: “The Nigerian Government has failed. Innocent people are losing their lives. All human beings deserve to live without fear of police brutality or intimidation. The world cant be silent whilst innocent people are being murdered whilst protesting #ENDSARS, #ENDBADGOVERNANCEINNIGERIA.”

Davido expressed his support of the movement by talking exclusively to NME on October 22nd explaining: “It started because the country was just tired of this division of the police that was really aggressive towards citizens, even to the extent of killing them, now it’s even past #ENDSARS. The government just has to do better. It’s been hundreds of years of the same thing, and this generation is just tired.”

Davido’s new single ‘FEM’ is now being used as an #ENDSARS protest song. Although the original party anthem had no political incitement in mind, it now has a new meaning as ‘FEM’ translates to ‘Shut Up!’ in Yoruba.

One occurrence on Oct 13th, first reported by Pulse, was where protestors used ‘FEM’ to interrupt Lagos State Governor Babajide Sanwo-Olu’s speech by reciting the following lyrics: “O boy you don dey talk too much / Small talk you don dey look who talk / FEM!” Protesters have even rewritten the original lyrics to mirror their experience: “I dey live my life / SARS dey turn am to shoot on sight”.

“I didn’t plan it!” Davido proclaims to NME I regards to the songs influence. “I dropped the song a month and-a-bit ago, and it’s been crazy to see how it’s grown to be used as a tool. It’s amazing to see.”

You can watch the video for Davido’s song, FEM, below.

With the activeness of people and the use of the EndSars hashtag all over social media, it’s clear that this political movement will not go down without a fight. It’s up to the younger generations not just in Nigeria but all around the world to continue to demand positive political change in the country.

Hi, my name’s Eternity and I’m a journalism student at Robert Gordon University. Ever since I was little I’ve always loved music with my parents bringing me up on artists like Ne-yo and Usher. Music inspires me and I hope to explore it further working for MusicInsiderGlobal. My hobbies include reading, cooking, dancing and travelling. Fun fact I’m half Nigerian, a quarter Scottish and a quarter Italian (even though I don’t look it). You can follow me on Twitter (@EternityUwaifo) and Instagram (eternityxrose).