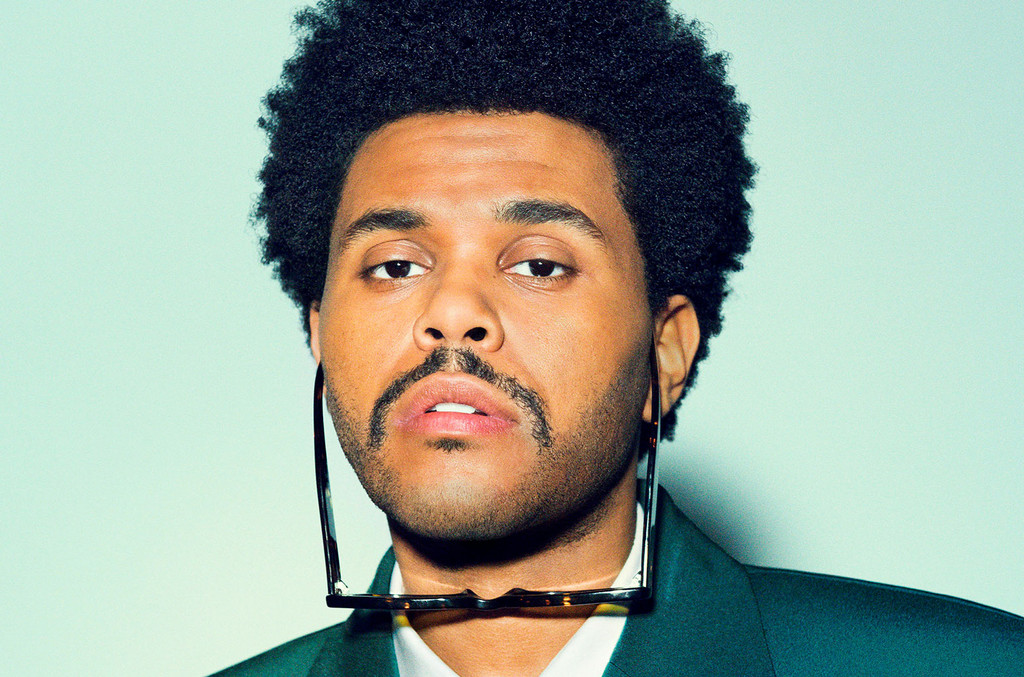 The Weeknd promises he hasn’t baked any bread during quarantine, unlike every other bored millennial on Instagram.

“I’m a horrible cook,” he says, laughing off the very idea, on a Zoom call from a desk in a tastefully decorated, exceptionally long room in his home on Los Angeles’ west side. A black bookshelf behind him displays monochromatic vases, while the wall-mounted TV in the background silently plays commercials. He’s lived in L.A. for about six years now, including a few years in a $20 million mansion in the gated community of Hidden Hills, where his neighbors included Drake, Britney Spears, and the Kardashians. He’s spent so much of the past decade touring the world, though, that he still sees his birthplace, Toronto, as his real home. “I didn’t realize how nice Canadians were until I left Canada,” he says.

The 30-year-old hitmaker, born Abel Tesfaye, is wearing a plain black shirt, and tomorrow he’ll reappear in a similarly understated white jersey. It’s a little jarring to see him in anything other than the slick red suit and bright-orange vintage-style frames he’s been sporting most of this year, as part of the action-packed, conceptual promotional campaign for his fourth album, After Hours.

As an asthmatic, Tesfaye has been taking extra precautions since the pandemic began. He works with a small group of people that includes photographer Nabil Elderkin and a few trusted affiliates and friends from his label, XO, all of whom get tested for Covid-19 every two weeks. In August, he celebrated the birthday of his Doberman, Caesar, with a cake for his “son” that he definitely didn’t bake himself. And he’s been watching movies — lots of movies, mostly ultraviolent Korean cinema. (The Wailing, a 2016 horror film about a mysterious plague, and I Saw the Devil, a 2010 action thriller about a man on a revenge mission, are two of his favorites.) He recently finished Waco and Unsolved Mysteries, among other Netflix and Hulu shows he’s been bingeing to pass the time. Sometimes he writes songs to the scenes and characters onscreen. “I’ll write about their relationship or something in a song,” he says. “It might never see the light of day. That’s an exercise. I love doing that.”

There’s been a lot of time to fill lately, ever since he had to postpone or cancel months of touring and other promotional plans meant to follow the release of his album. “I’ve been going kind of mad, actually,” he admits.

Truthfully, though, sheltering in place hasn’t been all that different from how he usually works. Tesfaye, who has called himself a “workaholic,” put together After Hours at studios in New York, Los Angeles, Toronto, and right here at home. It took two years, and he ended up building his most fully-realized world yet, an ambitious visual and musical cycle full of bruising fights, shady figures, dizzying neon lights, and inner demons. The druggy vibe and nihilistic lyrics of tracks like “Faith” and “Heartless” hearken back to a more turbulent time in his past, evoking his very public 2015 arrest for allegedly punching a Las Vegas cop, and assorted other benders.

To promote the album, he’s embraced a level of campiness he has only hinted at before, diving bloodied and bandaged nose-first into a spiraling, self-destructive character straight out of a David Lynch film. Every photo shoot, music video, and TV performance has been an extension of his fun-house-mirror world.

For Tesfaye, that immersive work scratched an itch that goes back to his earliest independent mixtapes, starting with 2011’s House of Balloons. The vision he brought to the photo shoots and music videos for those projects, which were compiled on 2012’s Trilogy after he signed with Republic Records, created a mystique that was central to his appeal at the start of his career. “I’ve always tried to do what I do with After Hours with every record I’ve ever done,” he says. “I just didn’t have the resources or the budget or the time to make them as cohesive and as singular as After Hours was visually.”

The result is an album that puts him in contention for the 2021 Grammy Awards in several top categories, and one he’s immensely proud of. “It might not be my best album,” he says. “It might not be what people gravitate towards the most in the future. Hopefully it is. But to me, it’s definitely my most perfect album. I could go back and listen to it and be like, ‘I’ve got no notes for this, really.’ ”

The world seems to agree on its perfection: After Hours is one of the past year’s biggest commercial smashes, by late August raking in 1.5 million album-equivalent units in the U.S. alone, according to Alpha Data, the company that powers the Rolling Stone charts. His chart-topping, Eighties-pop-inspired single “Blinding Lights” has been a fixture on the Rolling Stone Top 100 Songs chart since its release, and it’s reigned for months as one of the biggest songs on TikTok, the viral-video app that has become integral to pop success over the past two years. The song even spawned its own dance challenge, involving synchronized aerobic moves meant only for the very-coordinated. (Like many other 30-year-olds, Tesfaye says he will probably never learn the “Blinding Lights” dance.)

“We work really hard, like everyone else, to maintain that mystique and maintain our original sound, and still cross over and bring it with us,” he says. “Sometimes, your fucking stars just line up.”

Still, there’s a touch of frustration in his voice as he explains why After Hours’ runaway success hasn’t felt quite the same as what he experienced with 2015’s Beauty Behind the Madness — his first true pop blockbuster, driven by the Max Martin-produced single “Can’t Feel My Face” — or 2016’s Starboy, when he teamed up with Daft Punk for an experimental pop journey. “I’ve been cooped up here for the last four months,” Tesfaye adds. “Usually you go to a club or you go driving. You hear [your music] on the radio. I really haven’t been able to enjoy the fruits of my labor.”

Two years ago, Tesfaye released a surprise EP, My Dear Melancholy, that came across as a particularly dark project even by his standards, full of moody meditations that sounded like breakup songs. He headlined Coachella and began writing songs for his next full-length album. Then he decided to step on the brakes.

“I took time to live, and to live in New York,” he says. He’d always dreamed of living there, romanticizing the city his entire life. It felt even more special to give New York a try after years of being in the spotlight. On his After Hours track “Escape from LA,” he says his West Coast home base “will be the end of me.” New York was Tesfaye’s excuse to take a vacation from being the Weeknd, renting a TriBeCa penthouse and living off of the celebrity grid, for the kind of paparazzi-free privacy that’s more difficult in Los Angeles.

“I got to be a normal person — go to coffee shops, write, meet new people at the bar or in the streets, make new friendships,” he says wistfully. “I felt more normal in New York than I’ll ever do anywhere else.”

Instead of continuing work on the LP he’d started writing, he detoured and wrote a secretive screenplay that he refuses to discuss in detail — just one of several such projects he’s begun dreaming up since. “I can’t talk about it too much yet,” he says. “I really want it to be official.”

Tesfaye’s love of the movies has always been a big presence in his music, videos, and tours. In the visuals for After Hours, he references everything from Martin Scorsese’s dark 1985 comedy of the same name to Terry Gilliam’s 1998 adaptation of Hunter S. Thompson’s Fear and Loathing in Las Vegas to Roman Polanski’s Chinatown — all films that feature characters who get lost in their own lurid odysseys of sin, deceit, and excess.

In the middle of writing After Hours, he got a taste of what it’s like to be on someone else’s set when the Safdie brothers recruited him for a small part in 2019’s Uncut Gems, the buzzy, Oscar-robbed Adam Sandler action flick about a Diamond District jeweler with a gambling problem. Tesfaye played the 2010 version of himself: an enigmatic R&B singer on the rise whose backstage flirtation with the jeweler’s mistress prompts an onscreen fight between Tesfaye and Sandler. “After the fight, he would ask me if I was OK, and vice versa,” the singer says. “He was like an uncle. He’s a really caring guy.”

The real-life process of growing from the budding artist he plays in Uncut Gems to one of the world’s biggest pop stars hasn’t left much space for Tesfaye’s big-screen dreams. “This is my first time even opening up to anything, because I had to spend the last decade invested in this project, the Weeknd,” he says. “It really does consume me, so I’ve learned to step away from it a little bit, to miss it a little bit.”