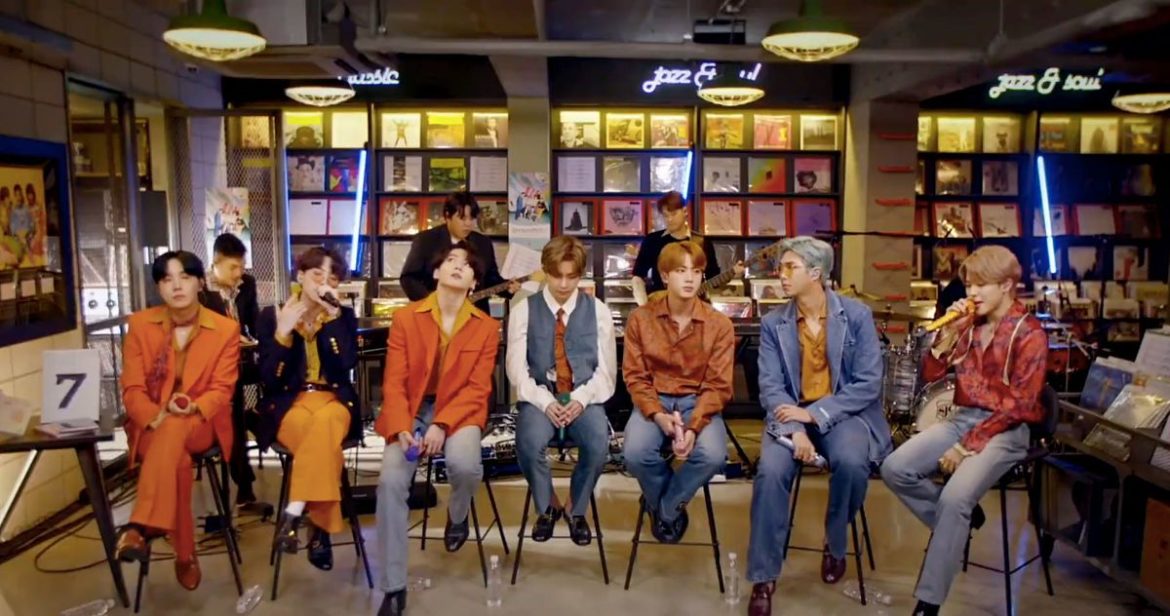 Last month, ahead of their staggering set of wins at the 2020 VMAs, BTS broke down their latest smash, “Dynamite,” to MTV News. “It’s a really fun disco-pop track about doing what we can do, even when things don’t work out as planned,” RM said.

But even as 2020 has been the year of things not quite working out they way we planned them, BTS has continued to thrive. “Dynamite” hit No. 1 on the Billboard Hot 100. The group picked up four VMAs, including one for Best Pop. And now, even if they can’t rock stadiums with their live spectacle, the group is still making it happen: Their latest performance for NPR Music’s Tiny Desk (Home) Concert series is proof.

The group brought “Dynamite” to life to kick things off, seated in a row and bedecked in their best ’70s attire — flared collars and pant legs and a sea of fall-ready earth tones — from a record shop in Seoul. It’s cool to see the group perform this way, backed up by a band behind them for what’s essentially an intimate in-store moment. And it’s the first time they performed the track with the band to accompany them.

BTS take advantage of that added muscle. For “Save Me,” the piano-led rhythm and live drums lend the track a stadium-grandeur quality, even as the action remains grounded in the diverse vocalizations between all seven members. After, “Spring Day” ends their set on a note of hope, thanks to a preface from RM: “This has been the roughest summer ever, but we know that spring will come, so let’s go together.”

It’s in keeping with a similar message J-Hope told MTV News in that same pre-VMAs interview about “Dynamite.” “We hope this song can be your energy,” he said. If the electrifying, show-stopping VMAs debut can’t be – or if you need just a little more, perhaps something autumnal and sweet — continue the vibes with BTS’s engrossing new Tiny Desk concert above.