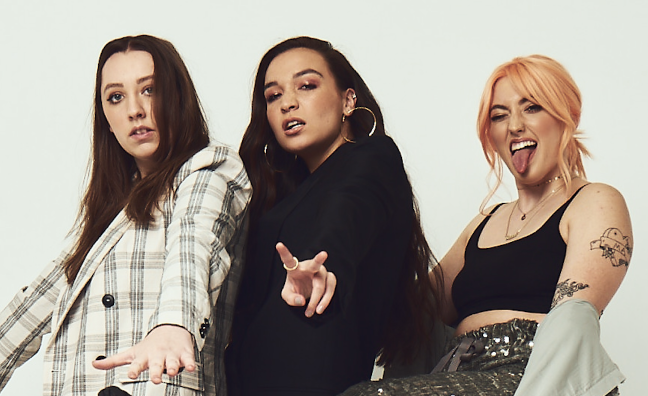 Avenue Beat are as upbeat as their melodies when Music Week calls in on the band in their adopted home of Nashville, Tennessee.

Since forming at the age of 14 in Quincy, Illinois, Sami Bearden, Savana Santos and Sam Backoff have worked tirelessly to transform themselves from musical theatre kids into country pop sensations. And the hottest new act on the label that broke Taylor Swift might have just cracked it with their latest single F2020, a melodic antidote to a dire year that also exploded on TikTok.

“We were having the worst two weeks we’ve had in a really long time,” begins Santos, telling its story. “We put out a single to country radio and it flopped, Sami’s cat died, and a bunch of random, wack stuff happened. I was sitting on the couch like, ‘I hate this so much.’”

Pushed to breaking point, Santos got writing (“The first verse and chorus fell out”), and the band swiftly posted a snippet on TikTok before heading to bed. The next day, F2020 had reached over four million views.

“That was unreal,” smiles Bearden. “We were texting each other in our group chat, saying, ‘What is happening? What do we even do? What are the next steps? This must be a prank!’ It was just crazy.”

On the viral clip, the band sing against a backdrop of the year’s most trying moments, as photos of Kobe Bryant, various Black Lives Matter protests and Australian wildfires flicker while they chant ‘Lowkey fuck 2020’. It’s surreal and hypnotic, while its marching rhythm lends a feeling of unity.

“We didn’t want everything to be [about] these horrible circumstances that you can’t do anything about,” explains Bearden. “There are still things that we can fight for and change that we can strive for.”

Now with over 15 million streams across TikTok and Spotify, the song has flipped their year around. F2020 was a Gen Z tactic aimed at convincing their label to put out the track, and now their team are taking note. So, could TikTok become the band’s new testing ground?

“It’s a really good way to figure out what’s going to work,” jokes Backoff. “We were like, ‘OK, now can we put it out?’ and it worked, so maybe we should go rogue more often!” They recently dropped another teaser entitled Messy, a stripped back ballad about a  broken relationship. It’s a small morsel of the new music they’ve been writing. “We have songs that we’re really excited to put out, we’re just trying to convince our team to let us do it again,” says Backoff.